Health and Psychological Benefits of Bonding with a Pet Dog

The Benefits of Pets on Mental Health

Why Kids With Pets Are Better Off

When I was a kid, a pet changed my life. It was not our family’s lovable mutt Frisky, or even Murphy, my pet duck. No, it was a four-foot yellow rat snake named Fred I got for three bucks when I was 13. He lived in a cage in my bedroom. I was transfixed by his enigmatic stare, alien beauty, and ability to swallow a mouse. I was hooked. Within a year, I had a menagerie of scaly creepy-crawlies. And while other kids were rocking out to the Beatles and the Stones, I was learning the Latin names of snakes and devouring books on reptile behavior and ecology. In retrospect, Fred turned out to be the metaphorical gateway drug that led me to pursue a Ph.D. in animal behavior and to eventually publish papers on topics like the love songs of alligators and the personalities of baby garter snakes.

While some of my early pets were unusual, companion animals play major roles in the lives of many children. Indeed, in her 2008 book The Powerful Bond Between People and Pets, psychologist Elizabeth Anderson wrote, “Nothing less than alchemy is involved when animals and children get together, and the resulting magic has healing properties that work well.”

But is it generally true that pets are linked to the psychological well-being of children? Yes, according to an excellent review of 22 studies of the impact of companion animals on child development. While some of the findings are mixed, the authors concluded that growing up with pets is linked to higher self-esteem, cognitive development, and social skills.

What is it about living with pets that makes kids better off? The authors of the review suggest several possibilities. These include the impact of pets on reducing stress, providing social support and companionship, and improving children’s  communication skills. But a new study suggests a different answer, and I expect the results will be controversial.

The research, which will appear in the September 2017 issue of the journal Anthrozoös, was conducted by a group of high-powered statisticians from the RAND Corporation. All of the members of the research team had pets or grew up with pets, and they anticipated that their analyses would demonstrate the positive impact of companion animals on child development. To answer these questions, the investigators turned to a large existing data set, the California Health Interview Survey. This is an ongoing project that assesses the health and well-being of Californians. For the survey, telephone interviews are conducted with randomly selected adults, adolescents, and parents of children under 11. In addition to information on health and behavior, the survey includes items related to socioeconomic status and demographic factors such as race, ethnicity, and sex. In the 2003 administration, participants were also asked whether their household included a cat, a dog, or both. (In this earlier post, I described another recent publication in which RAND researchers used this data set to study differences between adults who did and did not keep pets.)

To study the impact of pets on children, the researchers used the responses from households with at least one child between the ages of 5 and 11. Parents were asked a series of questions related to their children’s physical and mental health. Data from 5,191 children were included in the study; 2,236 lived in homes with a dog or cat, and 2,955 lived in households that did not include any animals.

As expected, the researchers found that children living with pets were generally better off than children who did not have a pet. Children raised in families with pets were reported by their parents to: 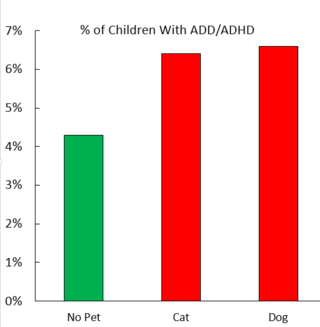 Rates of ADD/ADHD in kids with and without pets.
Source: Graph by Hal Herzog

Interestingly, as shown in this graph, children with pets were more likely to have been diagnosed with an attention deficit disorder or hyperactivity.

The pattern of generally better physical and mental health among pet-owning kids was true for children living with cats and with dogs. So, it would be easy for us to conclude that pets are good for kids.

However, that conclusion would be wrong.

The problem is that homes with and without pets were different in many ways other than the presence of an animals. For example, the researchers found that kids with pets were:

In short, children in homes with dogs or cats were wealthier and had a host of socioeconomic factors on their side. Could these advantages be the real explanation for the apparent relationship between pet ownership and improved health and well-being in children?

To answer this question, the RAND researchers turned to a sophisticated statistical technique called the “double robust regression approach.” Here is a brief description from their report: “We obtained a double robust estimate of exposure effect by adjusting for all covariates used in the propensity score model in our regression model, weighted by the propensity score weights.”

If you don’t understand any of this, don’t worry: You just need to know that this method of analysis enabled the researchers to examine the effects of pet ownership that remained after adjusting for 20 demographic and socioeconomic differences between households with and without pets.

What they found can be explained in a simple sentence:

Virtually all differences between pet-owning and non-pet-owning kids disappeared when factors such as race, home ownership, parental health, and wealth were taken into account.

This includes differences in the rates of ADD/ADHD. In short, the analysis showed that kids with pets are better off — but not because they have companion animals. It’s because they are likely to come from more prosperous homes and not to be members of minority groups.

When Research Gets Personal

When I read this report, I realized that these findings applied to me. I was raised in a solidly middle-class suburb where practically every family had a well-kept lawn and a dog. Unlike many kids today, I had a stable home and parents who were amazingly tolerant of my scaly animal friends. Indeed, my father constructed cages for Fred and my other snakes and lizards, and my mother did not complain about my menagerie, even the time she had to get me out of my high-school English class to retrieve an escaped king snake she stumbled upon while vacuuming the living room. Sure, my siblings and I had pets, as did all our friends. But we also had lots of advantages that less well-off children lacked.

I find the argument that the health and psychological benefits of pet-keeping to children are largely attributable to differences in wealth and social class convincing. Ironically, the researchers are less sure. In an e-mail to me, Dr. Layla Parast wrote:

“We all were truly surprised by the results, and unlike other work that we do at RAND (on for example, health insurance or hospital performance, etc.), we had a very personal and emotional investment in this topic.”

She pointed out that the data set did not have information on how long pets lived in the households, and thus they could not check for possible long-term effects of pets on kids. As she added:

“Perhaps if we could measure that, we would see something different. I feel like I can see the positive effects of interactions with animals on my 2-year-old son: it helps him learn kindness and compassion, to the point where he tries to hug and feed every animal we see — including a skunk and raccoon in our backyard.”

My wife Mary Jean agrees with her. She correctly pointed out to me that during his years of adolescent angst, our yellow lab Tsali was one of our son’s major sources of comfort and psychological support.

It’s hard to argue with that.