50 of the Most Popular Dog Breeds in the World

You’ve seen headlines like “Puppy Love: Pet Owners Are Happier, Healthier” and “How Pets Save Us Billions Every Year In Health Care Costs!” And it is true that a lot of studies have reported that pet owners have better physical and mental health than people who do not live with companion animals.  Further, we do not know whether getting a pet causes better health, or whether the causal arrow points in the other direction. In other words, pet owners might be different to begin with. If so, non-pet-related differences such as socioeconomic status might be the real cause of better health for companion animal owners. For example, people who are married, white, female, and wealthy have lower death rates. If individuals with these characteristics are also more likely to live with pets, we could wrongly conclude that it is dog or cat ownership that makes them live longer.

To study differences between pet owners and non-owners, the researchers turned to a huge data set—the ongoing California Health Interview Survey. Begun in 2001, it is the nation’s largest statewide comprehensive health survey. CHIS involves telephone interviews with randomly selected Californians. The interviews are conducted in five languages, and the sample is highly representative of the state’s population in terms of sex, race, household composition, and income. In addition to basic questions related to health and demography, the 42,044 adults interviewed in the 2003 CHIS survey were also asked about dog and cat ownership.

About half of the individuals interviewed lived with a pet: 26 percent of them owned a dog, 22 percent owned a cat, and 9 percent owned both. The researchers presented their results using statistics called “odds ratios.” Here is a summary of the results:

But Are Pet Owners Healthier?

Some of the big surprises in the study were related to health. The respondents were asked to rate their general health on a scale: 5=excellent, 4=very good, 3=good, 2=fair, and 1=poor. They were also asked about their height and weight, and whether they were currently suffering from asthma. 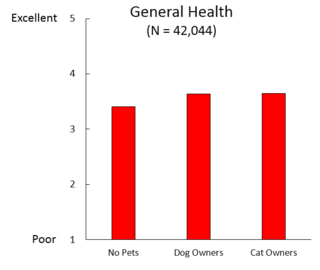 In short, when demographics and socioeconomic factors were controlled for, the researchers found no evidence that pet ownership was related to better health in the respondents.

Why This Study Is Important

As the authors point out, their study has some limitations: The data is more than a decade old, the study was done in California, and the researchers did not have information on how long participants had lived with their pets. And, as is true of nearly every study of the impact of pets on health, the study is “correlational.” This means that we cannot conclude, for example, that living with a dog or cat causes an increase in your chances of getting asthma.

The study, however, is important for several reasons: First, it demonstrates that differences in demography and income can erroneously lead us to conclude that pets are good for human health when, in reality, other factors are at play. My guess is that much of the presumed positive impact of pets on our health is really due to the fact that wealthy white people have access to better nutrition, housing, and medical care, and that they are also more likely to live with companion animals. For example, according to a recent study by the Brookings Institute, individuals in the top 10 percent of income earners live, on average, a decade longer than people in the bottom 10 percent. And people on the top rungs of the economic ladder are much more likely to have pets than people on the bottom rungs.

Second, the study calls into question the existence of any positive association between pets and the general health of the respondents. The researchers found that once factors like race, marital status, and income were taken into account, the health of dog and cat owners was no different from non-owners. And with more than 40,000 participants in the study, the researchers would have detected even a very small positive impact of dogs or cats on general health.